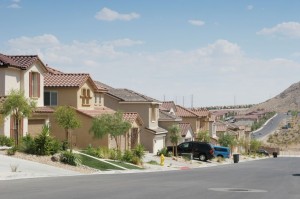 The Polar Vortex affected more than just flights out of the Northeast: Market analysts blame significant drops in housing sales to the brutal winter weather. Throughout America, the real estate market slowed its upward trend at the end of 2013—except in five cities. A handful of cities defied national trends, with house prices continuing to increase, Las Vegas among them. Known by now as one of the poster children of the housing recovery, Las Vegas shows no signs of stopping.

Though home prices dipped in most markets at the end of the year, 2013 overall showed strong growth. The Standard & Poor’s/Case-Shiller 20-city home price index revealed that the average sale of homes rose 13.4% over the course of the year, increasing in each metroplex. This marked the largest annual increase in eight years. The dip at the end of the year, though, combined with fewer construction permits requested, reveal that the recovery may continue at a slower rate moving forward.

Of all the cities monitored by the S&P, Las Vegas showed the strongest increase. Sale prices in the city leapt 25.5% in 12 months, significantly raising the overall average. Though the overall housing price index dropped 0.1% in the last months of 2013, home prices continued rising in Las Vegas through November and December. Four other cities in temperate regions increased during these cold months too, as did Washington, D.C., revealing the increase in these markets may have not been entirely due to the Polar Vortex. The Las Vegas housing market has grown steadily stronger since the recovery began, cold weather in most of the country or not.

The S&P housing index only reports figures from three months earlier, though other figures reveal that the recovery in Las Vegas and other markets is continuing into 2014, just at a slower rate. With steady increases throughout America, these trends, even factoring in the dips at the end of 2013, remain encouraging for investors and first time homebuyers. Residents of Las Vegas, especially, should celebrate these positive figures.

If you’re interested in  purchasing, refinancing, or learning more about mortgage rates in Las Vegas, simply fill out our Fast Response form or call our local branch at (702) 669-5400‎. Our experienced mortgage professionals would love to sit down and discuss your needs. We look forward to hearing from you!

Previous Post: The Shift to a Buyer’s Market in Phoenix
Next Post: Jacksonville Expected to Be One of the Hottest Housing Markets in 2014