Famous Georgians and Their Homes 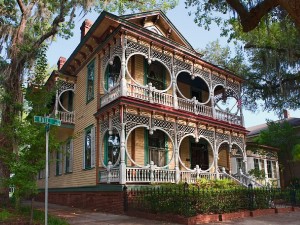 The Gingerbread House, one of the most famous homes in historic Savannah.

You wouldn’t know it, but some of the most famous people have lived in Georgia. Can you imagine their houses or how much they’d sell for? Well, look no further! Here we’ll discuss a few of the famous, explore their marvelous mansions, and just how much they’ve sold or are selling for.

Tyler Perry, more better known as Madea, is a native actor and filmmaker to Georgia worth roughly $600 million. In 2007 Tyler Perry built a massive estate off of Atlanta’s busy 285 interstate. The home is 34,688 square feet with 11 bedrooms and 7.5 bathrooms. 17 acres of courtyard and forests run adjacent to the property, filled with multiple swimming pools and tennis courts. It even has a separate building from the master home, a smaller studio that Perry dubs as a “hobby house”. 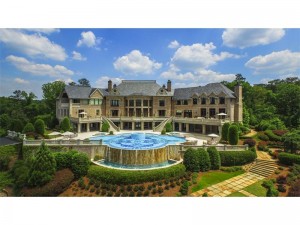 This French-style mansion was listed earlier this year for $25 million, yet just last month was sold for $17.5! Tyler Perry was willing to take a hit on this, stating his intentions to build a newer, larger house further outside the perimeter away from the hustle and bustle of Atlanta.

Some might know him as André Benjamin, but many might know him as André 3000 – half of the Outkast duo, actor and creator of several beloved movies and shows. However, some might fail to realize that while he grew up in Atlanta, he also still lives there!  André has a 9-bedroom, 9-bathroom Atlanta home worth $900,000. His mansion in Stone Mountain, purchased just over $300,000, consists of 2-bedrooms and 2-bathrooms. The home is affixed with swimming pool, jacuzzi, and spa-style sauna, and is currently estimated close to $600,000. The rapper/cartoon creator continues to live here in privacy to this day.

He may be retired, but many still know and love this Braves heavy-hitter. Located slightly off the perimeter of Atlanta in Duluth’s iconic Sugarloaf Country Club, Jones’ former 9-bedroom, 15-bathroom estate features a pool & spa, indoor basketball court, and even an elevator. 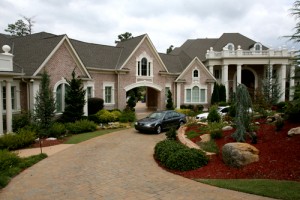 The Colonial center archway that connects Jones’ master home with the adjoining garage and guest house.

This colonial-style home features a crescent shape design – the master home on one end, and the slightly smaller guest house on the other. The home listed in 2013 for $4.99 million. It was even showcased on AT&T’s Home Turf back in the day. If you haven’t seen the tour , it’s truly a breathtaking look at a beautiful home.

There aren’t many who haven’t heard of Paula Deen or her decadent cooking. If you’ve never had a chance to visit the signature Savannah restaurant The Lady & Sons, it comes heartily recommended. 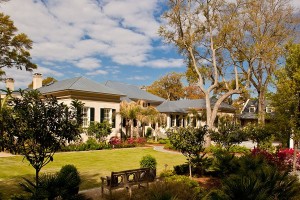 Paula Deen sold this Georgia home in 2015 for a whopping $12.5 million, but the French Caribbean home still stands. The 14,500-acre home consists of a 3-bedroom barn and 2 guest homes. The master home has a spacious ice room and maker, saltwater fish tank, and a stylized pool.

Fret not, Georgians! If you still want to get that Paula Deen charm, she still keeps multiple homes in Savannah.

This color-collared comedian’s home is located in the scenic River Club subdivision. Purchased in 2005 for 2.459 million, Ron has decked the 9500-square foot home with marble interior and wood trim. The home comes with an elevator, a massive bar, and a recreational room fitted with both billiards and a home theater. Outdoor amenities include a wraparound patio area, flush with luxurious pool. 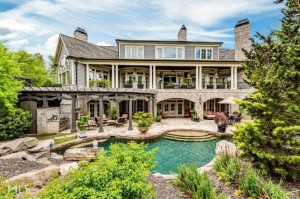 Ron White has attempted to sell the home several times over the years. Still unable to find a serious buyer, the potential home has lowered from the 3.5 million asking price to 2.5 million.

The beautiful state of Georgia is flush with famous people and their impressive homes. Can you imagine that one of these is actually still on the market? There are plenty other famous Georgians that we’ve left off – Ronald Reagan, Usher, and several others. Are there any others you would like to hear about? Get in touch with us directly, or shout them out to us on Facebook or Twitter.