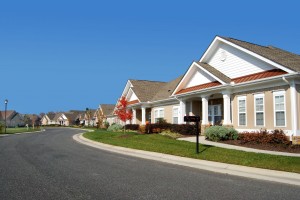 In some parts of America, you’d never know the recession ever happened—at least, not from a housing perspective. According to a new report released by the National Association of Home Builders (NAHB), the housing markets in 56 cities have returned to or exceeded their pre-recession levels. This is significant, especially for homeowners in metro areas that faced large drops in home values and market activity. It’s a sign that the recovery has worked and is working, both in these 56 markets and the other cities throughout the U.S. still feeling the effects of the recession.

The NAHB report, called the Leading Market Index, analyzes various economic factors in 350 metro areas, focusing on builders permits, home prices, and employment levels from the past 12 months. When compared with historical levels, the Index value derived from these figures tends to reveal the health and strength of a market. The latest Index report found that the national average is running at about 88% of normal economic and housing activity. The primary lagging factor across the board was builders permits for single family homes. In 22 markets, though, permits have surpassed historic normal levels, indicating these cities have fully recovered from the recession. An additional 34 metro areas show an overall Index value at or above their pre-recession levels.

Baton Rouge, Louisiana topped the latest Index report, scoring 40% higher than a year ago. Honolulu, Oklahoma City, Austin, and Houston completed the top five housing markets, and Salt Lake City made its way into the top 10. With strong economies and rapidly increasing home values, the housing markets in these cities have fully weathered the storm and recovered from the recession. In some neighborhoods, home prices may remain low, but on the whole these metro areas have stabilized and grown tremendously—and are continuing to grow. Analysts predict builders will begin construction on more homes in the next six months, which will increase the Leading Market Index throughout the nation.

A Boost for Real Estate

These increases are good news for any homebuyer, whether or not they experienced significant drops in home values during the recession. As housing markets continue to stabilize, homes in more and more areas are once again a good investment. If you live in one of the metro areas returning to or surpassing pre-recession levels, your home’s value should continue to increase. Other markets, though, are worth noting, especially those that have grown year-over-year on the Leading Market Index but may still have a ways to go in their recovery. As employment rates, home values, and homebuilder permits increase in these areas, they’ll become better and better real estate investments. If you have the means now, these recovering cities, even if they face inventory shortages, are wise places to consider buying a home.
If you’re interested in purchasing, refinancing, or learning more about mortgage rates, simply fill out our Fast Response form. Our experienced mortgage professionals would love to sit down and discuss your needs. We look forward to hearing from you!
Share